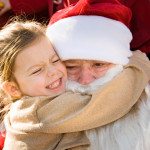 Parents are often conflicted during the holidays when Santa Claus is ever-present in the media and community. Should the belief in an imaginary, mythical figure be encouraged? How will your child feel when he or she discovers the jolly figure in the red suit carrying a big bag of Christmas presents is not real?

While there are no definitive answers, the following information may help you make the right decision for you and your child.

The Development of Imagination

Between the ages of two and three, children begin developing imagination and engage in some form of play-acting or pretend. Most parents have experienced being served an imaginary meal, and few question whether the child actually believes the food is real.

Researchers agree that imagination is an essential tool children use to learn about things and people they don’t directly experience. Dr. Paul Harris of the Harvard Graduate School of Education says that imagination and role-play appear to have a key role in helping children understand someone else’s perspective: “Whenever you think about the Civil War or the Roman empire or possibly God, you’re using your imagination. The imagination is absolutely vital for contemplating reality, not just those things we take to be mere fantasy.”

Dr. Jacqueline Woolley at the University of Texas in Austin has conducted a number of child studies on imaginary or mythical characters such as Santa Claus, the Tooth Fairy, and the Easter Bunny. Her research indicates that children as young as age three can distinguish between reality and fantasy, but lack the ability to accurately assess the difference when presented with available evidence. In other words, children learn by what they see, what they hear from others (testimony), and inference, the latter becoming more reliable as they grow older. Studies suggest that belief in Santa Claus begins around age three, peaks at about five, and declines thereafter, so that by nine, only a third of children still believe.