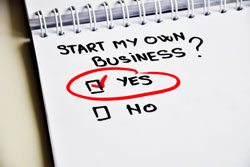 The combination of inexpensive technology, accessible virtual markets, and easy funding through crowdsourcing is changing the face of entrepreneurship. Today’s new business starters are socially sophisticated, willing to bear more risk than previous generations, and more likely to work out of a home or small office and rely on others for business processes. Some are small guerrilla outfits surfing from one hot concept to the next, and some are venture capital-funded geniuses with disruptor ideas.

It is a great time to start a new business – the best time in history.

Despite the success, access to these new possibilities was unfortunately generally limited to white males. Minorities (except in their limited communities) and women were excluded, restricted by racial prejudice, cultural stereotypes, and inefficient educations.

America in the 21st century is a more open society and access continues to broaden regardless of sex or ethnicity – anyone smart enough and brave enough to create a new business can try. According to a 2013 American Express report, there are 8.6 million women-owned businesses in the country, generating more than $1.3 trillion in revenues and providing jobs for 7.8 million employees. The rate of growth between 1997 and 2013 in new women-owned businesses has been one and a half times the national average. In a U.S. Census News release in 2011, Tom Mesenbourg, deputy director of the U.S. Census Bureau, proclaimed, “The growth in the number of minority-owned firms – both employers and non-employers – has far outpaced that of businesses overall.”