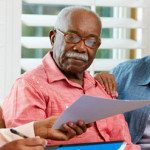 Baby boomers are the first generation of a new retirement era with the burden of saving the bulk of their retirement income and making those savings last 20 to 30 years. This responsibility is due to the decline in company pensions which shifted saving and investment responsibilities to employees, as well as an increase in life expectancy after attaining adulthood (almost 20% since 1950). The challenge of investing has been particularly difficult in the last five years; a study by Thornburg Investment Management calculated the annual “real return” for many classes of investment during the period as being negative.

The possibility of a future investment environment where inflation remains low and interest rates rise (the opposite of the 1960s to 1980s) producing slower economic growth, projected healthcare expenses not covered by insurance, and the uncertainty of program changes in Social Security and Medicare will result in people continuing to work as long as possible, accelerating their savings in their later years, and seeking maximum returns in their portfolios.

Your Investment Options for Retirement

There are literally hundreds, if not thousands, of different investment vehicles available. The following list describes the most popular choices, while some investments (such as gold and collectibles) are not listed because, according to Warren Buffett, they are difficult to analyze, lack any productive use, and their future price depends solely on the hope that the next buyer will pay more for the item than the owner paid.