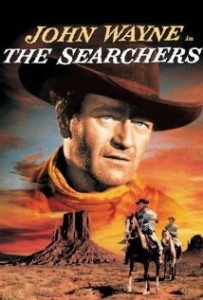 Young boys growing up in the 1950s experienced the apex of the Western movies’ popularity. Movie characters played by actors John Wayne, Randolph Scott, Joel McCrea, and Gary Cooper were bigger than life and represented the best of the American spirit. Western characters like cattleman Tom Dunston, Sheriff Will Kane, and Texan Tom Buchanan of the films Red River, High Noon, and Buchanan Rides Alone respectively fired the imagination of school boys every Saturday afternoon, celluloid examples of men with integrity, courage, and responsibility.

Their examples were reinforced by their small screen counterparts who appeared on more than 120 different Western series in the 50s and 60s. Younger kids were introduced to the Old West Code and mystique through shows starring William Boyd as Hopalong Cassidy while Gene Autry and Roy Rogers portrayed themselves. Young Boys (and some girls) cantered broomstick mounts named for their heroes’ horses—Topper, Champion, and Trigger—through the neighborhoods, always prepared to best a black-hatted villain of their imagination. As kids grew older, more complex characters like Sheriff Matt Dillon of Gunsmoke, hired gun Paladin of Have Gun, Will Travel, and Wagonmaster Major Seth Adams of Wagon Train replaced the earlier simpler characters, but continued to reinforce the same qualities of American manhood.

The Code of the West 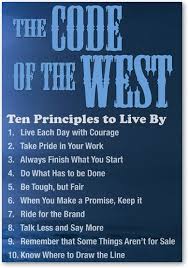 While my parents initially taught me the traits and behavior of being a good citizen, their instructions were reinforced by what I watched on evening television and Saturday matinees. In those days, screen characters were rarely ambivalent about good and evil. The rules of manhood were simply stated and black and white with no ambiguity. As a young boy growing up in Texas and watching the movies, I learned a lot about

The measure of a man is his character. Your word and a handshake are inviolable, no matter the cost. An essential part of character is meeting your responsibilities. Who can forget the powerful scene of Sheriff Will Kane writing his Last Will and Testament as he waits to face four gunmen alone arriving on the noon train or the speech of Davy Crockett in the movie The Alamo: “There is right and wrong – you got to do one or the other. You do the one and you are living. You do the other and you are as dead as a beaver hat.”

Respect for yourself and others

The Golden Rule—Do unto others as you would have them do unto you——was the foundation of the Code. John Bernard Books in The Shootist expressed the Rule in different, more direct language: “I won’t be wronged, I won’t be insulted, I won’t be laid a hand on. I don’t do these things to other people. I require the same from them.” Never try on another man’s hat or mount his horse without permission.

Cowards were not tolerated on the frontier since one man’s failure endangered the rest. “Courage is being scared to death . . . and saddling up anyway.” A real man would never shoot an unarmed or unwarned enemy; some cowboys called this the “rattlesnake code”—always warn before you strike.

Ethan Edwards spends years searching for his niece taken as a young girl by the Indian raiders in The Searchers despite his belief that she had become the wife of the Commanche chief. A cowboy learned that a good hat just gets better as it gets older or as old bronc busters say, “Making it in life is life is breaking horses. You’re gonna get thrown a lot, but the secret is to keep getting back on.”

“Talk low, talk slow and don’t say too much.” A braggart is “all gurgle and no guts.” There is no worse insult than being said to be “all hat and no cattle.” Remember, never miss a chance to shut up. It’s the man that makes a cowhand, not the clothes he wears.

Behavior around girls and women

A real man only cusses around other men, horses, and cows – never in the presence of women and girls. Never strike a woman under any circumstance. Never disrespect another man’s wife or girlfriend. The word “Ma’am” is a sign of respect, not an indication of age.

Sometime in the late 1960s, the goal of movies and television shows changed from entertainment to reality, portraying life as it is, not as it should be. Morals became fluid, dependent upon circumstances. The rights of individuals over-shadowed the needs of the community and respect of others. Instead of heroes, we have anti-heroes. We lost faith in our institutions—the Government, the Church, Science, and Schools—and adopted the philosophy that the end justifies the means. We began to worship individual rights, rather than community responsibility. As a consequence, our lives are more segregated and insulated; we are suspicious of others and their motives and the world for children has become more perilous.

I regret that my grandchildren may not experience the adventures and freedom of my childhood, that the values I was exposed to as a young boy are considered naive and no longer relevant. While the Old West portrayed in movies never really existed, the sense of duty and integrity embodied in old films reinforced the values my parents and church strove to instill in me.