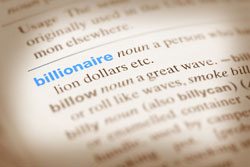 In 1916, John D. Rockefeller, the father of the petroleum industry, became the world’s first billionaire. Nearly a century later in 2015, there were 536 American billionaires of a total 1,826 billionaires worldwide, according to Forbes. That number may in fact be low – the Wealth-X and UBS Billionaire Census estimates there were 2,325 billionaires globally in 2014, including 609 Americans.

Identifying those who are billionaires from those who have significant wealth can be difficult, since many are reticent about publicly discussing details of their wealth. Also, for many, growing personal wealth is not a goal, but the byproduct of their business activities. In his book “Trump: The Art of the Deal,” Donald Trump, the real estate mogul ranked at number 405 on the Forbes 2015 list, explains that money was never a big motivation for him, except as a way to keep score. “The real excitement is playing the game,” he states.

What Is a Billionaire?

Simply stated, a billionaire is a person who has a net worth of $1 billion or more. In other words, if you can sell all of your assets for cash, pay off your debts, and have $1 billion remaining in the bank afterward, you are a billionaire. Having $1 billion in assets with debts of $900 million doesn’t make you a billionaire, although you and your family are unlikely to worry about future college expenses or retirement.

A billion dollars, like all large numbers, can be difficult to comprehend. For example, counting to $1 billion at the rate of a one dollar bill per second would be a lifetime career for three men working a standard 40-hour work week. If you hired them at age 21, they would complete the task more than 44 years later, assuming they worked eight hours every day without taking a single sick day. The counted $1 bills would fill a building the size of a football field to a height of 8.3 feet and weigh more than 1,100 tons.
&nbsp:
Read more . . .