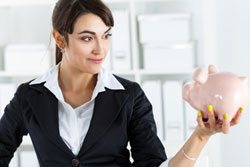 A Pew poll from March 2015 reports that more than 80% of Americans are concerned about their savings, and seven out of ten worry whether they have enough money to cover their expenses. Yet since 1960, the personal saving rate in the United States has been inconsistent and generally trending downward, ranging from a high of 17.0% in May 1975 to a low of 1.9% in July 2005, according to the U.S. Bureau of Economic Analysis as reported by the Federal Reserve Bank of St. Louis. In April 2015, the rate clawed its way up to 5.6%.

However, failure to reach financial goals is not necessarily caused by lack of effort or desire. Despite the best of intentions to save money, adhering to a personal budget can just as easily lead to a cycle of deprivation and overspending as it can a hefty bank account.

Some have suggested the reason that Americans live beyond their means is that there’s simply a dearth of available information to guide them. However, a recent survey of Amazon.com indicated the availability of more than 58,000 books dedicated to saving money. Likewise, television and radio shows about saving fill the airwaves, and sample budgets abound on the Internet.

Additionally, 223,400 personal financial advisors provide advice as of 2015, and the field is growing “much faster” than average relative to other professions, according to Bureau of Labor Statistics. It seems clear that there’s another reason budgets are not as successful as they ought to be.

A budget is a plan to reach a theoretical level of financial health in the future, with a focus on reducing spending and growing income. Budgets tend to fail because they are improperly planned, poorly implemented, or both. More importantly, the roots of failure can frequently be traced to our natural human tendencies that have been evolutionarily hardwired into our psychology.