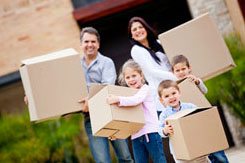 Historically, almost two-thirds of households in America live in a place they own. Homeownership is a key prong of the American dream, and according to a American Housing Survey by the U.S. Census Bureau, some 9 out of 10 Americans achieve it during their lifetime.

Also key to American homeownership is the notion of moving up – i.e., buying a home, living in it for a few years, then selling to reap the profit in order to purchase another property, either a higher-value place or one that better suits the owners’ current living situation. This was particularly popular in high-growth areas like California and Las Vegas. But that was before the recent economic downturn and a massive slump in housing prices. Now, the decision to sell your house and trade up is not as clear-cut as once thought, and owners are left wondering, Should we stay, or should we go?