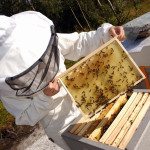 The bee has always occupied a special place in man’s psyche. Young children learn the origins of babies with stories of “the birds and the bees,” while their industry is so respected that a person engaged in intense activity is “as busy as a bee.” “Spelling bees” and “quilting bees” are so named because a meeting of people working together resembles the scenes within a beehive. Closely guarded information is “none of your beeswax,” and the flappers of the 1920s popularized the “bee’s knees” to express the coolness of an object or activity.We have seen girls with “bee-stung lips,” and refer to irritated people as having a “bee in their bonnet.” And who hasn’t made a “beeline” for a special object?

As far as we know, bees have been around for about 125 million years. They are descendants of wasps, most of which are predator carnivores. Bees, however, switched from hunting prey to collecting pollen for food – a nice adaptation, since the food doesn’t fight back. Scientists have since classified nearly 20,000 species of bees, and they are found on every continent except Antarctica. They are the most efficient pollination agents in nature, a critical factor in the appearance of the world as we know it.