Skip to content
Humankind’s fascination with gold can be dated back as far as 4000 B.C., and for much of our collective history, possession of gold was a sign of wealth and status restricted solely to governments and nobility. Eventually, the first gold coins are believed to have initially financed long-distance trading around the world – around 500 B.C., Darius the Great of the Persian Empire is thought to have minted the first coin, the “daric,” to facilitate the expansion of his empire and the needs of his army as it moved into foreign territories.

Many countries came to use gold and silver coins as currencies for centuries. However, during the worldwide depression of the 1930s, every industrialized nation ceased using the gold standard, subsequently severing the close link between the value (and quantity) of gold and the value of money.

Despite this, gold continues to be a sought-after commodity due to its scarcity and reputation as a hedge against monetary or societal collapse. But does it deserve a place in your portfolio?

Today, gold is available in several forms, including the following:

Minted as currency by many countries, these coins are now collected as much for their numismatic value as their gold content. Like other collector’s items, such as stamps and fine art, only experts, or those who have access to experts, should consider this investment.

Issued by countries and commercial businesses, these coins are priced according to their weight and purity. The more popular coins are the Canadian Maple Leaf, the South African Krugerrand, and the American Eagle.

Available by weight of one gram, one ounce, ten ounces, and one kilo (32.15 ounces) generally with 99.99% purity, bars are also referred to as “gold bullion.” A standard gold ingot like that found in the U.S. Fort Knox Depository, and commonly depicted in movies, is seven inches long, three and five-eighths inches wide, and one and three-quarters inches high, and weighs 27.5 pounds. At current market prices, an ingot would have a value in excess of $500,000, much too expensive to support an active investor market.

Ownership in a company whose sole business is the search and discovery of gold, and the potential value of the element in the resources not yet produced is a common type of gold investment.

A gold ETF does not typically hold gold as a commodity, but tracks its price with a combination of financial derivatives.

A gold ETN is a debt security that’s value fluctuates based upon the price of the underlying index – in this case, the price of gold. While this investment includes credit risk, the benefit of being taxed as a long-term capital gain rather than paying ordinary interest exists with this vehicle.

Gold is not money or currency, but an investment which must be converted into money before it can be used to purchase other assets. Of course, individuals and businesses can agree to exchange an amount of gold for a service or product – as was done for centuries – but it would require negotiation about the relative value of each, a timely and potentially risky process for both parties. 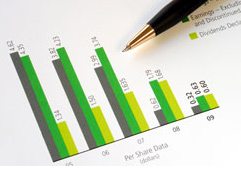 For years, investors, fund managers, and stock analysts have sought reliable indicators to project the future return and risk of owning an individual stock, bond, or a portfolio of securities. The underlying assumptions are as follows:

These assumptions exemplify modern portfolio management and are the basis for the widely used capital asset pricing model (CAPM) developed in the 1960s, which led to a Nobel Memorial Prize in Economics for its creators. Enabled by technology, Wall Street wonks amass and analyze massive amounts of historical data searching for hidden, often arcane relationships to identify undiscovered opportunities for gain without risk. The results of their analysis are often publicly available for use by private investors.