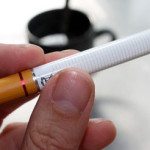 Electronic cigarettes – colloquially known as “e-cigarettes,” and initially introduced into the United States in 2007 – target smokers who are increasingly forbidden to indulge their habit in public places. Sales reached $500 million in 2012 and are expected to double to $1 billion in 2013, and double again in 2014.

Despite the growth year-to-year, total sales for e-cigarettes are just a fraction of the total tobacco product sales in the U.S., projected to reach more than $106 billion in 2015 with a total global market of almost $890 billion.

What Is an Electronic Cigarette?

An e-cigarette is a nicotine delivery device designed to resemble and mimic the visual appearance of an actual lit tobacco cigarette. The nicotine is delivered to the user in the form of a vapor, rather than in the smoke of combusted tobacco. As a consequence, an e-cigarette eliminates the harmful chemicals associated with cancer and heart disease. The same mechanism is used in nicotine replacement therapy inhalers.