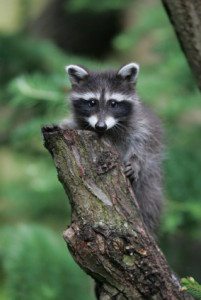 Our middle-class neighborhood borders on the green belt surrounding White Rock Lake. The houses, mostly constructed of brick with wooden shake roofs, are surrounded by trees of every type – pecan, oak, maple – and regularly attract denizens of the forest to gardens, backyards and alleys. Armadillos, rabbits, possums and raccoons are frequent visitors; now and then we see a coyote or two patrolling their territory, hoping to catch a stray cat or small dog for a meal.

For the most part, humans and animals live harmoniously, probably because the latter exists beneath the notice of the former. Except for the occasional encounter with a car resulting in a mangled carcass in the middle of a street, the animals hide during the daylight hours, limiting their excursions to the shadowy hours of dusk and dawn and the night.

For reasons known only to itself, one cheeky critter, a large grey sow, decided that my neighbor’s attic would be a perfect place to raise a family and systematically began an assault on the wooden roof. My neighbor, Bob, a petroleum engineer by trade and an egotistical bully by temperament, was determined that his castle would remain impregnable and so began an epic battle of wills.

The small human-like hands of raccoons are perfectly designed to spread the shakes of a wooden roof and thus gain entry. Each weekend, Bob would climb to the roof, reposition or replace the loose shakes, and try a new remedy to repel the intruder. He tried live traps, lethal traps, traps that clamped down on the raccoon’s leg, and poison, even though poisoning is illegal in most states. Nothing worked. Despite his best efforts, it seemed clear that the raccoon was destined to win and Bob’s attic would become its new nursery.

One early morning as Bob was shaving in preparation for work, he heard the familiar sounds of scrambling feet and wrenching shingles from the roof. “At last”, he thought, “an opportunity to see the S.O.B. face to face.” Realizing that he would have the advantage of a lower position even when standing on a ladder, Bob decided that he would end the confrontation once and of all. Grabbing his.38 pistol from the nightstand, he slowly snuck through the house, out the sliding back door into the backyard, and up the ladder. As he peered over the eave, he spied the raccoon near the center ridge of the roof.

It was a perfect angle. The bullet, if he missed, would fly high into the sky and wouldn’t endanger anybody, or so he thought. Leaning into the ladder, he took the recommended two-hand grip on the gun and began to raise his hands to aim. The raccoon, suddenly aware of his presence, jumped and began to race over the top of the roof to the other side. Bob, in his haste to take the shot, jerked back, fell off the ladder, and shot himself in the side.

It was an exciting morning for the neighborhood and, of course, everyone turned out to see the police cars and the ambulance with their sirens and red lights. What had happened? Had Bob’s wife grown tired of his bullying and taken matters into her own hands? Was his injury the result of a home invasion? As the facts became known, people drew a sign of relief that there was not a criminal on the block and felt no small satisfaction that Bob had finally gotten repaid for his over-bearing manner. The raccoon disappeared.

Two weeks later, Bob was home from the hospital, convalescing in his easy chair watching television in the den. Fortunately, he had missed his vital organs, suffering only painful entry and exit wounds and a chipped rib. His wife and daughter, needing some relief from his constant complaints, took the opportunity to leave the house for an evening of shopping. Bob was alone, taking pain pills and feeling sorry for himself. He sensed or saw movement out of the corner of his eye and turned to look out of the glass door.

The raccoon had returned! Sitting on his haunches on the top step of the patio, staring straight into Bob’s eyes, the raccoon’s thin black lips drew slowly into a toothy grin. It was too much for Bob. All of the pain and humiliation he had suffered over the past two weeks, the frustration of being unable to best a simple animal, flooded his mind. “The raccoon had to pay, no matter the cost.”

Bob hobbled into the bedroom and got the .38 and returned to the den, just in time to see the raccoon go through a hole in the fence to the alley. Night was beginning to fall and the neighborhood was quiet. Bob, determined to kill the raccoon and gain some revenge for the ills he had suffered, followed it into the alley, still dressed in the underwear he had donned that morning. As the gate closed behind him, he stood there, naked except for his white briefs and a bandage that covered a whole side of his body, holding the gun in the trusted two-hand grip, peering into the dusk, searching for some movement of the animal.

Suddenly, the sky lit up from headlights of a car turning into the alley. Bob was blinded and raised one hand to cover his eyes when a voice blared from the loudspeaker of the police car, “Stop! Drop the gun! Raise your hands!”

Of course, Bob was arrested, being caught in the alley in his underwear carrying a gun with no identification. No one was at his house to verify his identity, so he was taken to the local police substation to await transfer to the downtown jail. When he returned home the next morning, he was a changed person.

Whether or not the raccoon returned to Bob’s house is unknown. Neither Bob nor his family ever speak of the incident, but they have added a big, black dog to the family. As time goes by, Bob’s battle with the raccoon has become a neighborhood legend or maybe a myth and is retold whenever a raccoon seeks to take up residence in another house.

This article first appeared in ezine.com on February 22, 2012.