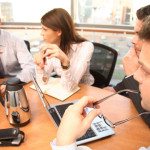 Dale Carnegie’s book “How to Win Friends and Influence People” was published in 1936, and is one of the best-selling self-help books of all time with an estimated 15 million copies sold. Some have called the book the bible for building relationships for its insights into human nature.

The principles espoused by Carnegie continue to be valid almost a century later. Why? Because human nature doesn’t change. Each of us wants to feel important and special, and we are naturally drawn to those who make us feel better about ourselves – they are the kind of people we want to be like and be around.

Relationships are especially important in selling products or services and retaining clients. S. Anthony Iannarino, a consultant who works with sales organizations, is blunt about the link between sales and relationships, stating that a salesman is “first and foremost a relationships manager.” The process of using the tools of relationship building to foster sales is generally referred to as “relationship selling.”

In the modern world, people are constantly and continually barraged by other people trying to sell them a product or service. New technology that educates, entertains, and brings us closer means that solicitations – letters, email, Internet ads, catalogs and flyers, phone messages, and television ads – occur around the clock. As a consequence, potential purchasers are wary of product claims and suspicious of the person sponsoring the product. We grow hard shells and practice selective hearing to protect our pocketbooks and our sanity, lowering our guard only to those we trust.

Relationships begin with acquaintances, some of which progress to friendships and fewer still to trusted partners. Relationships evolve as trust grows, ruled by the sense of value that each party imparts to the other. Conflicts invariably arise between two parties, and the ability to resolve conflicts is the test of a relationship. Many salespeople are conflict-adverse and are unable to handle a buyer’s resistance, perhaps because they doubt the value of the products or services they offer to the potential purchaser.

Dictionaries define selling as “persuading or inducing someone to buy, while Wikipedia defines the act of selling as “to trick, cheat, or manipulate someone.” As a consequence, potential purchasers have learned to be wary of product claims and suspicious of the person sponsoring the product. Carnegie, recognizing the impossibility of trying to convince a stranger to buy something he or she neither wants nor needs, stated, “There is only one way under high heaven to get anybody to do anything. Did you ever stop to think of that? Yes, just one way. And that is by making the other person want to do it. The only way I can get you to do anything is by giving you what you want.”

Dr. Armin Falk, an economist at the university of Bonn, proposed a “theory of reciprocity” in the February 2006 issue of “Games and Economic Behavior” in which he proposed that people invariably reward kind actions and punish unkind ones. He claims that people evaluate the kindness of an action not only by its consequences, but also by its underlying intention. His theory explains why results and outcomes tend to be fair (satisfactory to each party) when both parties are mutually active, and unfair when one party coerces the other. Though some might say that the findings were commonsense, the theory is the foundation for relationship selling.