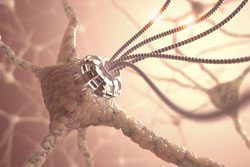 In 1959, physicist Richard Feynman predicted a future in which scientists would, by manipulating atoms and molecules, be able to build materials and structures of higher strength, lighter weight, increased control of the light spectrum, and greater chemical reactivity.

Everything of a physical nature – human beings, plants, minerals, air – is composed of combinations of atoms and molecules bound together either by shape or electronic charge. Manipulating atoms on a nano-scale would theoretically allow humans to reproduce everything from diamonds to food.

While the benefits of such technology are virtually countless, it has created considerable concern among some that molecular manipulation may unwittingly bring more problems than solutions – up to, and including, human extinction. Organizations such as Friends of the Earth of Australia, Individuals Tending Toward Savagery in Mexico, and the Organic Consumers Association in America actively oppose any further development of nano-scale projects.

What Is “Scale” and Why Is It Important?

Nanotechnology is the science that deals with the manipulation of matter on an atomic, molecular, and supramolecular scale – in other words, much smaller than what the naked eye can see. Each nanometer is one billionth of a meter – approximately the length a fingernail grows in one second. To put that in perspective, a human hair is roughly 80,000 to 100,000 nanometers wide, a red blood cell is 2,500 nanometers, and a strand of human DNA is 2.5 nanometers in diameter.

It is only through the development of extraordinary precision instruments, such as the scanning tunneling microscope and the atomic force microscope, that nanotechnology has become possible. Its promise and risk arise from our growing understanding of quantum physics, which deals with ultra-small objects. Surprisingly, the behavior of substances on a nanoscale is often contrary to its properties on a larger scale.

For example, substances in bulk form that can’t carry an electric charge – insulators – may become semiconductors on a nano level, just as melting points and other physical properties may change. An aluminum Coke can ground down into a powder of 20 to 30 nanometers may spontaneously ignite in air – a property that makes it a rocket fuel catalyst. Similarly, both a diamond and the graphite in a pencil are made from carbon, but they have vastly different properties due to the way the carbon atoms bond.