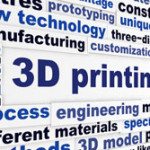 Need a new shoulder joint, a gun, or that tiny little part that fits inside your child’s toy? 3D printers have the potential to change our lives and make every person an inventor, a sculptor, or a chef.

These revolutionary printers are increasingly visible in our everyday lives:

Michelangelo once explained that every block of stone has a statue in it, and it is the task of the sculpture to discover it. Once the artist understands the three-dimensional image he seeks, his task is to carefully chip away the extraneous material to reveal the hidden structure. If Michelangelo had been able to use a 3D printer, his creative process would had been exactly the opposite: starting with nothing and gradually creating his mental image by adding substance until the form he sought was complete.