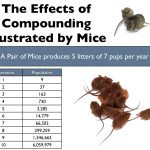 Humanity’s first experience with compounding – the accumulation of vast numbers through the systematic addition of small sums over a period of time – came from nature, not mathematics.

Thousands of years ago in the Fertile Crescent of the Middle East, ancient humans abandoned their nomadic ways, formed the world’s first communities, and began to till the ground, raising wheat, barley, and other grains. Growing seasons concluded with reaping and storing grain, which was used during months when agriculture was not possible and other food sources were scarce.

But because the large amounts of grain were stored in roofed buildings (silos), they provided an irresistible food source to Mus musculus – the common house mouse – which would feast protected from their natural enemies by the shelter of the silos. As a result, mice became extremely prolific, eventually leading to the spread of mice around the world as they followed migrating agriculturalists. In fact, a single pair of mice can produce 70 offspring during their two-year life, with an average litter of seven pups, five times a year.

The addition of 70 mice over a two-year span would be bothersome, but not catastrophic. A single mouse eats about one gram of food per day; 70 mice would eat about 70 grams, or less than a single bushel of wheat each year. However, when considering the effect of “compounding”, the mice pose a serious threat.