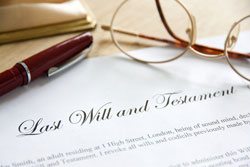 While you can’t take your property with you when you die, you can direct how your assets will be distributed by making a will. Unfortunately, some people never get around to the task, and instead die “intestate” – a legal term dictating how all property greater than the sum of your enforceable debts and funeral expenses, in the absence of a will, is distributed. Surprisingly, almost half of all adults die without a will, according to a 2012 Rocket Lawyer survey. In such cases, state law determines who gets what – including custody of minor children.

It is not just the poor and uneducated who die intestate. Celebrities such as Howard Hughes, Pablo Picasso, and Sonny Bono all failed to have wills, as did Swedish author Stieg Larsson, best known for “The Girl With the Dragon Tattoo” series of novels. As a consequence, distribution of their property to loved ones and business partners was delayed and expensive.

Unfortunately, even those with the foresight to prepare a will often forget to update its provisions as their circumstances change over the years—the birth and maturity of children, accumulation or divestiture of assets, or changes in personal responsibilities, for example. Therefore, the transfer of their assets may be inconsistent with their final wishes, overly expensive, and a source of emotional pain and frustration for their loved ones. In the worst circumstances, the estate passes (escheats) to the government, an undesirable result for almost all people.

Some people elect to postpone or avoid writing a will because they falsely believe that taxes and administrative expenses may reduce the amount of funds (what lawyers call the “corpus” of the estate) that will be distributed to their heirs. However, a will does not complicate the distribution of an estate, but is intended to facilitate the passage of assets and maximize the benefits of the parties. Failing to write one only complicates matters for those who will be left to pick up the pieces.