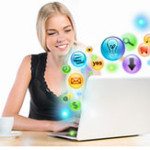 The business marketplace now is more fecund than at any point in history. Yet it is harshly discriminating, rewarding only those who are able to master its complexity and rise above the cacophony of simultaneous competitive messages. Traditional marketing avenues – print, radio, and television – have lost their dominance in the last decade as the use of the Internet and new social media has exploded. The time spent by Americans on the Internet has risen more than 25% year-over-year (320,689 million minutes, 2011; 401,699 million minutes, 2012) according to the Nielson 2012 Social Media Report – and if you want to sell anything in today’s market, you must be visible online.

Josh James, founder of Omniture (now part of Adobe), writes in Forbes about the value of social media: “Social media isn’t a passing fad. The primary reason you have to be social is because that is where your customers live.” Having recognized the way social media is transforming consumer purchasing decisions, James has made social media usage a condition of employment at his new startup, Domo.