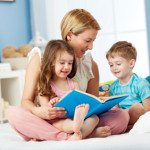 In 1937, Johnson O’Connor, then the director of the Human Engineering Laboratory of the Stevens Institute of Technology, performed a detailed study of vocabulary use and familiarity with research subjects, ranging from high school and grammar school pupils, to professors and businessmen. He determined that the largest vocabularies are possessed by “major executives,” and the size of one’s vocabulary correlates to his salary. Johnson also concluded that a large vocabulary was an “important concomitant of success and financial prosperity.”

In the years since, other research have confirmed additional benefits of larger vocabularies: Higher high school achievement, higher reading achievement, even higher IQs. Educator and writer E.D. Hirsch, Jr. asserts that there is no better index to accumulated knowledge and general competence than the size of a person’s vocabulary: “Simply put, knowing more words makes you smarter.” Therefore, a sizable vocabulary is a great asset for your children to achieve success in the 21st century.

The Value of Vocabulary

Words are important because they allow you to convert thoughts with precision and concision and share them with others. Nathaniel Hawthorne, an 18th Century American novelist and author of the classic ”The Scarlet Letter,” may have expressed the power of words best: “Words…so innocent and powerless as they are, as standing in a dictionary, how potent for good and evil they become, in the hands of one who know how to combine them.”

The combination of words – skillfully used – have empowered, entranced, and enthralled us in the hands of orators and writers throughout history. Verses of religious texts, Lincoln’s memorialization of the dead in his Gettysburg Address, and Franklin D. Roosevelt’s message to a nation deep in the throes of economic depression, unemployment, and uncertainty (“The only thing we have to fear is fear itself”) are just several of many memorable phrases and passages that will be eternal.

Words are essential to imagination, the ability to form new images and sensations that are not experienced through the physical senses. Words convey emotions, memories, concepts, and facts, and are the basis by which humans communicate. Being able to say what you mean in words that others understand without confusion is essential to understanding. As Mark Twain said, “The difference between the right word and the almost right word is the difference between lightning and a lightning bug.”