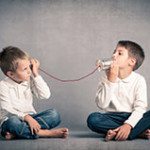 The purpose of communication is to convey information from one person to another. Through the choice of written and spoken words, ideas, concepts, emotions, thoughts, and opinions are exchanged. Unfortunately, miscommunication is common – the listener or reader fails to understand what is said or written. Dale Carnegie, author of “How to Make Friends and Influence People,” said, “90 percent of all management problems are caused by miscommunication.”

When you consider the tensions between men and women, young and old, friends, and family members, it seems that most people are guilty of poor communication. But it’s possible to develop effective communication skills by learning how to speak and write simply and clearly, using plain language that’s easily understood by most people.

“If you have time, try to mow the lawn this afternoon,” said the father as he walked out the door to go to his office. His teenage son, head down, concentrating on breakfast, grunts in reply, “Uh-huh.” To the father’s dismay, the yard remained untouched when he returned home. The son, when confronted by his angry father, excused his lack of action with the explanation, “You said ‘if I had time,’ and I was at the mall all day.”

This scene is repeated every day in thousands of homes across the country. The father was guilty of not saying what he really meant: His intent was to instruct his son to cut the grass that afternoon, even if that meant he had to rearrange his schedule or miss another activity. In an effort to avoid seeming controlling, the father added the false condition “if you have time,” expecting his son to interpret the underlying meaning of his statement. His son naturally focused on the conditional “if you have time,” rather than the direction ”mow the lawn.” As a consequence, both parties felt unfairly treated by the other.

Similar misunderstandings arise at work, in schools, on the playground, and at home. Whether in speaking or writing, misunderstandings arise due to poor word choice and the failure to realize that communication includes two equally critical components: the speaker and the listener, or the writer and the reader. As the NBA Hall of Fame coach of the Boston Celtics Red Auerbach said, “It’s not what you tell them…it’s what they hear.”